Day Twelve: Biotics, Are You Pro or Anti?

Day Twelve of a Whole Thirty: I didn’t quit today, either. It’s primarily for the noble purpose of debunking the wild claims of the vegetable-eaters, I think. I’m holding out past at least Day Sixteen, which I am informed is “Tiger Blood”, which sounds promising even if not strictly true in the literal sense. At present, though the prospect of tiger blood coursing through my veins does have a certain appeal, I think I would rather be sopping some off my dinner plate with a large chunk of homemade bread.

I have chronic heartburn/acid reflux/whatever the chic term is, which the Whole Thirty people claim is caused by degradation of the stomach lining or something to that effect and fixed by their diet. Naturally, I was interested in fixing heartburn, but having given elimination diets their due in the past, I remain skeptical of this one being any different. It is my held opinion that diets such as these are generally cooked up to sell books, a rather cynical outlook supported by the existence of many contradictory diets. If measurable, repeatable results were behind any of these, there wouldn’t be so much argument about which is best.

I haven’t talked about digestive probiotics yet, have I? They come recommended to me by my personal home medical amateur. And you know I follow all the advice of my personal home medical amateur, so I’m taking a capsule filled with who-knows-what (its contents involve approximately fourteen syllables and appear to be a dingy white powder) once daily. This capsule’s end is to help restore “friendly” bacteria in the recipient’s guts. I have taken the liberty of scanning the front of this product’s box for your viewing pleasure: 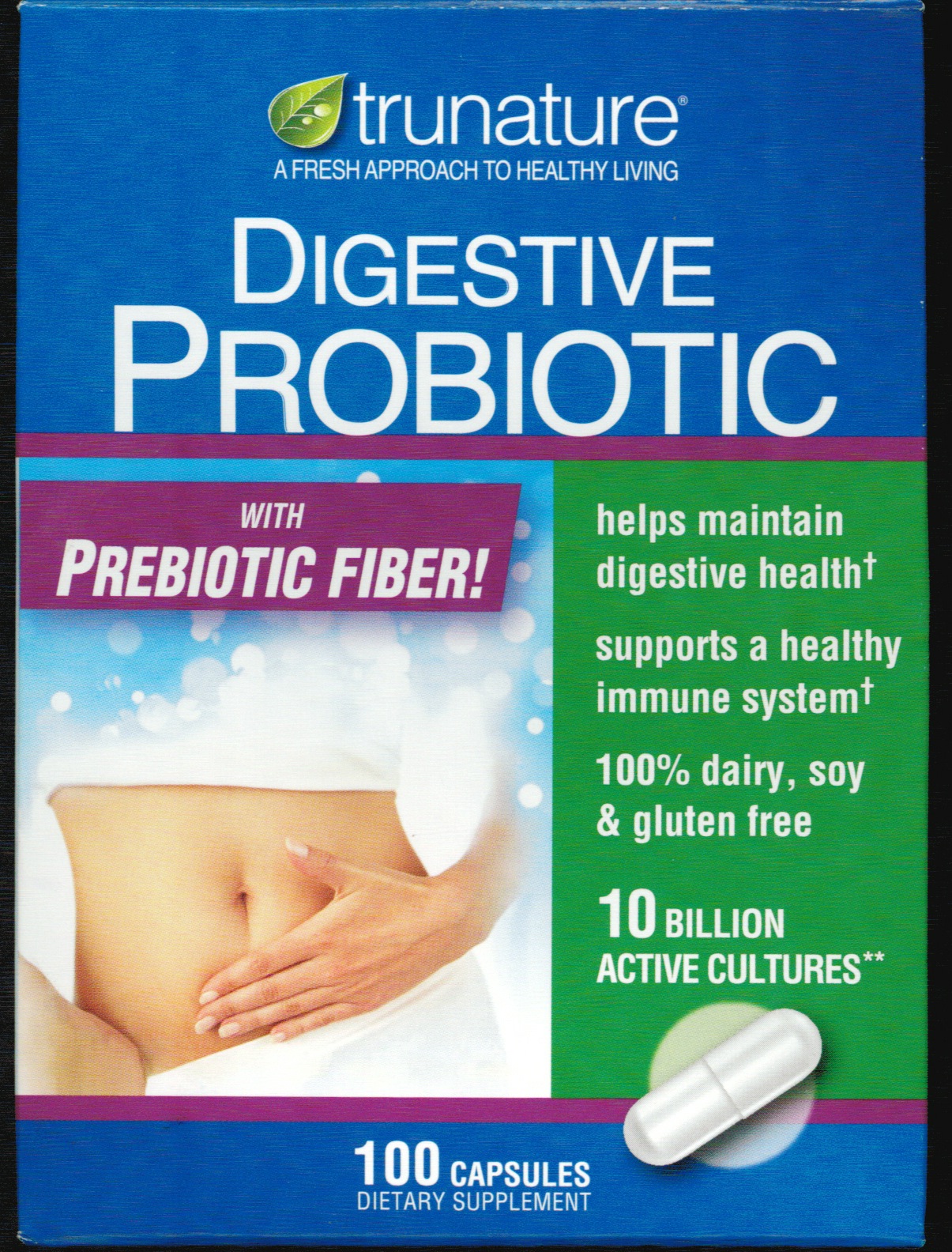 I have given no small amount of thought to the picture on the box and I’m still not sure what I’m supposed to draw from it. Do digestive probiotics cause pert tummies? Is the picture supposed to demonstrate the target demographic of digestive probiotics, viz. people who like to show off their midriff with saucy hip action? I note that they do not show the woman’s face. I like to imagine that her face is screwed into a horrible grimace suggestive of a recent dosage of apple cider vinegar. I briefly considered reenacting this photo myself for comparison purposes, saucy hip and all, but I quickly decided such imagery is not to be borne on a family-friendly blog. Sorry.

Anyway, on to the medical claims. The first thing we may notice is that the box is liberally sprinkled with daggers and asterisks. There is at least one dagger symbol on all sides of the box except top and bottom, and they follow most paragraphs of text. The dagger leads to the following statement, in bold:

† These statements have not been evaluated by the Food and Drug Administration. This product is not intended to diagnose, cure, or prevent any disease.

As far as I can tell, this translates to:

† We pretty much made this stuff up so you would give us your money. We don’t know whether it will do anything to you or not, and we’d rather not have the government find out because the resulting loss of marketing copy from our label would be even worse than this disclaimer we now have to include here.

I do not doubt most people consuming digestive probiotics have a general sense of well-being, as I am a firm believer in the placebo effect. Unfortunately it’s not working for me, as I was convinced these were a placebo from the start. The quotes around “friendly”, however, lend this paragraph a more sinister aspect. Are these bacteria only pretending to be friendly? Is this like the “mother”? Actually, I still don’t know what that really means, only that I find it vaguely disturbing. Same deal here. I don’t want my bacteria to have any lingering questions about whose side they’re on.

On an unrelated sidenote, I’ve decided not to write a new post for every day of the Thirty. I hold a general principle that if one has nothing to say, one should be quiet. On most days I now find that I have little to say that has not already been said. If the blog is silent, you may safely just insert some grumbling about how slowly time passes, or how empty my belly is, or how all is vanity and of the writing of diet books there is no end, and I’m sure you will be reasonably close to whatever vapidity I would otherwise have written.

Day Twelve. The end is kind of in sight! If you can see more than two weeks into the future, anyway.

Links in the preceding entry, if any, may include referral codes. These generally have the effect of tossing a few coins into my purse if you purchase something after clicking the link. If you find this practice to be a morally reprehensible case of corporate shillery (and I don't blame you if you do), or if you otherwise find the idea of supporting my blogging efforts to be distasteful (a similarly reasonable stance), then I cordially invite you to refrain from clicking any such links.